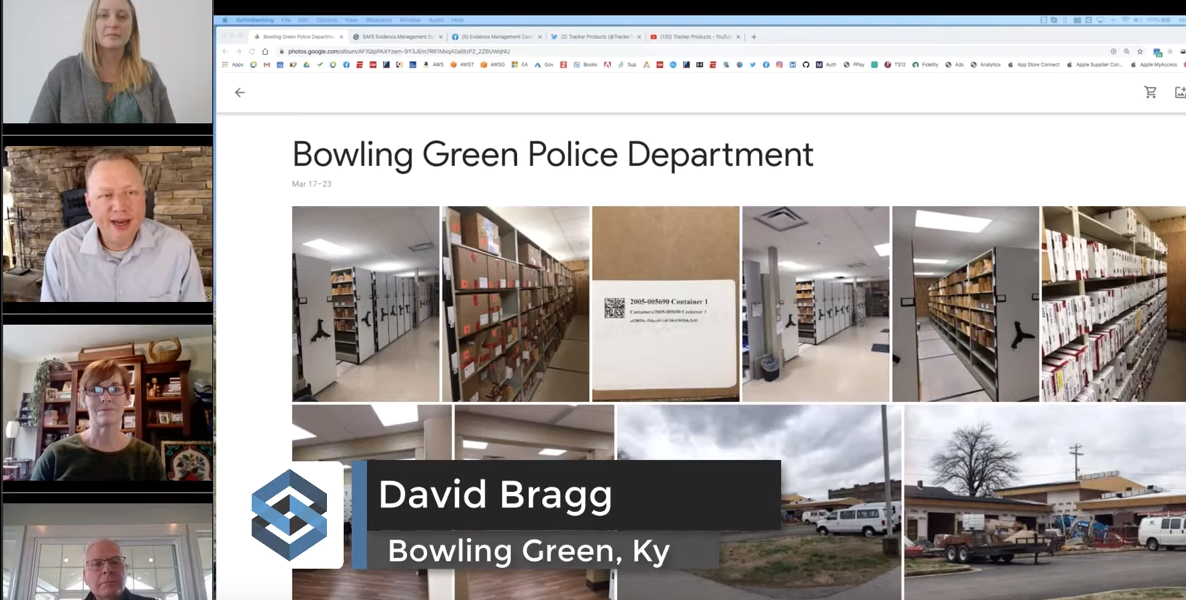 Using Your Evidence Room Data As An Analytical Tool

Ben opened with some impressive metrics from the BGPD, saying, “Since they started data-driven entry of evidence, the BGPD has entered 167,766 pieces of evidence. The great news for David, and I’m sure he’s excited about this, is that they’ve disposed of about 122,000 of those items. So, right now, their active evidence count is exactly 44,943.”

Also on the webinar, were Dana and Lindsey. Ben switched gears and asked the group about the influence of COVID-19, and the social distancing directive, “You guys are closed to the public right now. So, if somebody wanted to pick up evidence, the answer is ‘no’ at the moment. Right?”

Although David and Dana’s offices were closed to the public, Lindsey said, “We had a new police department built for us last year and we had it designed where there is a room in between us and the public. So there is no physical contact They can come up to a window – and we speak through the window – [then we] figure out their case, get their items ready, put their items into that room, come back into the property room, and then we buzz them in [to the room] to get their items.” 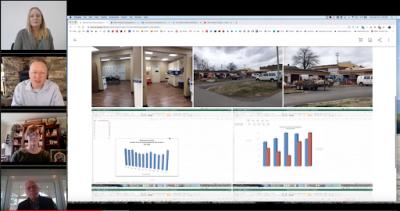 In regards to the reports themselves, David exports the Tracker Product metrics, to build graphs and charts for the layman to easily understand. He explained, “Every year, I do a year-end analysis of our evidence room – with brief commentary. It’s not very long, because if it’s a lengthy document, people are not going to read it. I think using data, and putting it in some form of [simple] visual aid, kind of slaps you in the face; from a management standpoint. I mean, these charts don’t lie. It’s eye-opening for me, for command staff, and for your legislators, your board of commissioners and supervisors. I can tell you… it worked for us.”

About the charts, Ben said, “As we’re getting ready to go through four different charts, my assumption is that you sort of build a story here. [In the chart below], This looks to be the intro to your story. Like, Hey, this is what’s coming in the door for the last year.” 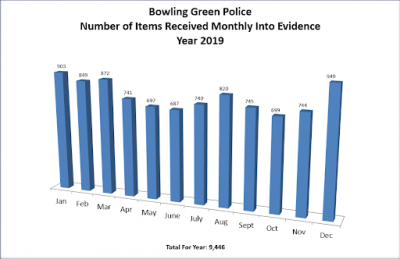 David responded, “Yeah. This is basically a comparison of month to month for one solid calendar year. And if you look at the chart [above], it’s pretty predictable; aside from maybe two spikes: one in January, one in December. You’ve got a picture that’s pretty consistent, so we can plan how many supplies we’re going to need from month to month. You can even use this data to compare this December with last December.”

Ben said, “Let’s go into your next graph; why don’t you explain what’s going on here…” 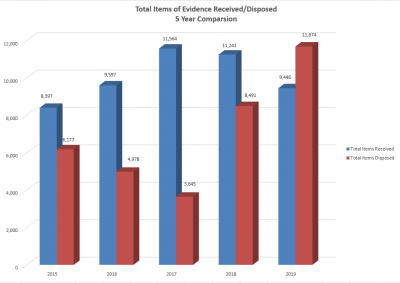 David explained, by saying, “This one’s a real tell-tale. This is a five year comparison – receiving intake [blue] versus disposal [red]. If you look at those first four years, those were pretty pathetic years for disposals. I do this every year, so this was no surprise. But what is surprising is, being able to use that data to get to where you want to go for a particular goal.”

Ben asked, “But I am curious, when I look at this, what year did you take over property? When did you start the work that you were doing?”

David said, “Late 2011. [But] we had an antiquated system… at best it was inadequate. I started doing these charts in 2012, so I knew from year to year what we were looking at. And in using the data from [Tracker Products’] SAFE [software], I forecasted, probably two years ago – in the year end analysis – that by the end of 2019, we were going to have reached capacity. And that came true.”

Ben said, “The interesting thing is that you were showing data modeling like to indicate there was a problem coming. Let’s move on to your next graph, because I really liked this one too. Explain to me what we’re seeing [below]…” 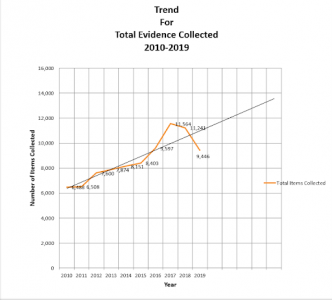 David explained, “I’m putting current and past data in this trend chart. We were reaching capacity in the storage. So, our command officers took this data, presented it to our city manager, and then presented it to our board of commissioners. They looked at the data and realized that yes, you are in need. So, the board of commissioners approved a two-story, 10-car-bay, bulk-storage facility, on our headquarters site.”

Ben said, “Let’s move on to your last chart [below]. Why don’t you give me a quick rundown…” 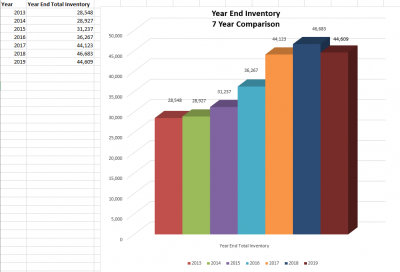 David said, “This is looking at the complete year end inventory; and just about every year – except that last year – it kept ticking up. At the end of the year we constantly have more inventory in storage. We went from a low of about 28,500 in 2013; six years ago. Now we’re just about double that.”

Ben wrapped up the webinar with this final thought, “If you’re going to go to command staff and explain to them what the problem is, you are a thousand times better to have a printout of these [types of] graphs. Walk in the room, sit it down at the table, and say nothing versus just walk in and start talking about your disposition problem. It paints a much better story. This is what motivates people into doing something about these problems. Now, you know what the answer is: building more storage or fixing disposition problems… Those are conversations to be had, but this is how you should walk in the door and present the problem.”

David agreed, and closed with, “Nobody’s going to [just] listen to you. You’re going to have to have the proof. If [the information is] ignored, it’s not on you, it’s somebody else’s decision to make and they have to bear the responsibility for ignoring them.”

Tracker Products and The Evidence Management Institute want to give you something productive to think about during this time of uncertainty.  This is the second, of seven, in a series of free evidence management training and panel discussions. Want to join the discussion? Register for the series,  watch and comment on the recordings here, or – to stay up on the latest – join the Evidence Management Community Forum.

Or, if you’re interested in Evidence Management Training Classes from our partner company, VISIT EMI HERE.