Increased technological use, in nearly everyone’s business and personal lives, has resulted in an explosion of digital crimes. For law enforcement, in particular, it’s not uncommon for squad car video, body cam recordings, crime scene photos, audio files, or mobile phone data to be collected on almost every criminal case. Digital footprints, of any kind, inevitably leave a trail that can be traced back to perpetrators… if the evidence is properly preserved, handled, stored and tracked.

To ensure that digital evidence is collected, managed, examined or presented in a manner that safeguards the integrity of the evidence – in order for it to be admissible in court –  law enforcement must have an advanced tracking system in place that will simplify and streamline the evidence management process, and secure digital evidence throughout its entire lifecycle.

Once the system is established, everyone who is responsible for handling the evidence should be trained to use the software and comply with standard operating procedures (SOP) in order to maintain an unbreakable chain of custody.

Why change the old paper-and-pen way of tracking evidence? It’s not effective in the current environment, much less designed for the future of digital evidence management.

According to an article by the FBI, computer-related crime rate is increasing manifold each year. 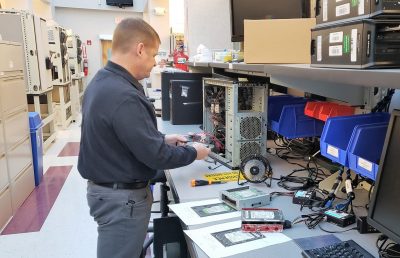 In May 2018, three New Jersey men were sentenced to prison for conspiring to provide material support to the Islamic State of Iraq and al-Sham (ISIS), which is designated by the United States as a foreign terrorist organization. The FBI became aware of the men’s activities through a tip from an informant.

Once that tip was deemed credible, digital evidence became key to investigating the men’s motives. The digital evidence left on the suspects’ computers and phones was crucial to showing criminal intent in the actions the men took—from planning to travel overseas, to viewing ISIS propaganda online.

The evidence showed all three had viewed ISIS materials, maps, and videos, including videos that depicted executions. Their communications also contained evidence that showed their desire to join ISIS and revealed some of the efforts they took to conceal their activities.

“Technology has changed what we do. It has impacted us in areas such as security and encryption, and it has pushed us to pursue the development of additional tools and techniques,” said FBI Supervisory Special Agent Steven Newman.

Within two decades, managing digital evidence went from a specialty for a few of the FBI’s personnel to an absolute necessity for all law enforcement agencies; no matter how small.

State and local agencies simply must be trained in the proper handling and management of digital evidence in order to keep up with the rapidly changing equipment and technologies. By doing so, those who break the law work will have to work mighty hard to stay a step ahead of these advanced investigative techniques.

RELATED: THE FBI FEELS THE STING OF CHOOSING THE WRONG EVIDENCE MANAGEMENT SYSTEM

Sustainable evidence practices must accommodate the changing needs of digital evidence management. All law-enforcement evidence-operations would benefit from leveraging available technologies to increase operational efficiency and effectiveness. Implementation of tracking software and the adoption of digital evidence standards isn’t an option for the distant future; it’s a requirement right now.

Our SAFE evidence tracking software is more than just barcodes and inventory control, this Tracker Product is an end-to-end chain of custody software for physical and digital evidence, resolving each of the critical issues facing evidence management today. To learn more about Tracker Products,