We’re living in a different time right now with the influx of COVID-19; and we’re all navigating uncharted territory. With the world being quarantined, Tracker Products decided to do something we’ve never done before: offer free training, webinars, and virtual tours of evidence rooms.

In a recent webinar, Ben Townsend, the CEO of Tracker Products, sat down with Shawn Henderson, the executive director of the Evidence Management Institute  and Krista Morton, who has worked in the property and evidence room of the Des Moines Police Department for 25 years; and is currently the Property Management Supervisor. In this webinar, we dug deep into the workings of one of the best run evidence rooms out there. Together, we took a virtual tour of the police department, discussed best practices and offered practical tips to the hundreds of evidence custodians that were in attendance.

Here are some highlights of the webinar…

Ben opened with some facts and a question, “Since you started using a software application for entering evidence, you guys have entered a little over 210,000 pieces of evidence, but [currently] you only have 39,941 items checked in. That means you have disposed of over 80% of every piece of evidence that has ever come in. Those are incredible numbers. On any given month, do you know how much evidence you guys bring in?”

During the conversation, Krista mentioned that since their department started using Tracker Products’ SAFE software about 5 years ago, all of the officers – there are just over 300 of them – log into the Tracker software to enter and label evidence for their own cases. For some “old-school” officers it was a big change going from a paper system, while more technically savvy officers accepted it hook-line-and-sinker. Especially in the narcotics unit, where the software helped to streamline the movement of their drug evidence.

Knowing that each law enforcement agency has a unique way of handling evidence, the software system can be personalized. For example, the protocols for the Des Moines Police Department, call for all officers to enter the evidence from a central location. They can’t do it in the field, from their squad cars, or even at their desks. The department believes that by having a central location, it allows officers to package, label, and enter evidence at the same time.

Another difference is Krista’s department requires that currency be counted and entered as its own item; something many officers continue to forget.

When it comes to drugs, they have a unique system: The narcotics unit handles all the narcotics evidence for the entire department, and they store that evidence in a separate location. Also, that vault can’t be accessed alone; it’s always a two-team effort when they manage the drugs – one person will be present from the narcotics unit and one from Krista’s team.

About this, Shawn said, “There are a lot of agencies that’ll have heightened security on storage areas. But you’ve got entry requirements that go outside of the evidence management unit and involve the narcotics unit. Even though it’s something that I’ve never heard of, it sounds like a great idea and it achieves a higher level of security.”

During the webinar, nearly 100 questions came from the audience; many of them questioning the 80% disposition rate for the Des Moines Police department. It was inferred that the evidence unit was arbitrarily disposing of evidence. Nothing could be further from the truth.

Regarding narcotics, Krista said, “Narcotics officers are the ones that are telling me what can be destroyed. So, once I create a list of everything they said could be destroyed, I print it out, and give it back to them, so they can double check it. If they say, ‘Yes, everything is still okay to destroy,’ We’ll go to our County Attorney’s Office and they will sign off on it. So, when we set our destroy date, we have somebody from our office – usually me or Nick – plus, somebody from our Office of Professional Standards, a Sergeant from narcotics and another officer from narcotics in the drug room [together]. When we do our disposal, twice a year, somebody from our Office of Professional Standards, the Sergeant, and the other officer in narcotics will take it to a place to burn.”

Aside from the way that drugs are disposed of, Shawn asked about the accountability process, “On every [other] piece of evidence that you dispose of, do you obtain an officer’s – or a sworn investigator’s – authorization to dispose of those items?”

Krista replied, “Oh yes. All the cases get assigned to a detective and we don’t do anything unless they sign off saying, ‘Okay, destroy it.’ We don’t release anything. It all has to come through a detective.” 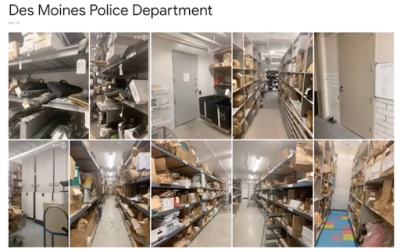 Ben asked, “How do they like the automated system – where they get an email saying a case is up for review – in comparison to getting the paperwork that they used to get?”

Krista said, “Like anything else, at first they didn’t like it, but now they like it a lot better. They don’t like it just because it’s easier if they don’t do the reviews. I have a system. They have 30 days. If they don’t respond in 30 days, we do a second notice where we include the Sergeant. If they still don’t do it after 30 days, then we include the Lieutenant. If it gets to the fourth notice, it goes to the Captain. You have to have the help of the gold braids who enforce it. And I’m lucky that they get on them and say, ‘Hey, it should not even be coming to me. Your people need to get these done.’ So that’s tremendous. You know, sometimes you can’t get anything done unless you have the backing.”

Unlike Krista, most evidence departments don’t get that type of support from the agency’s management. To address this issue, Shawn said, “You really have to start quantifying the problem and start speaking the language of management. They speak a language related to liability and quantifiable problems. If you just tell them that things are terrible; that doesn’t mean anything to a Police Chief. But, if you can show them – and document quantifiably – I have this much evidence coming in, but I only get rid of this much evidence… I mean, if your ratio is extremely low, you can demonstrate mathematically… we’re going to fill up within three to four years if we don’t do something. Or, if you bring them a process that exposes the agency’s liability, most of the time police executives respond to that.”

Running short on time, Ben changed topics from disposition to inventories, saying, “I’m going to jump into an area that you guys are unbelievably good at, and that’s doing inventories – you’ve done 1,203 inventories in the last couple of years; going through the process of verifying the stuff that is in all the lockers. Now Krista, are things coming back as you expect or are you finding problems?”

She said, “There’s always little issues. Something gets missed that’s supposed to have been logged or [something is] on the wrong shelf. It’s always positive when you get no errors. So you’re happy. But it doesn’t happen very often. There is always something unfortunately; nature of the beast when you have thousands of items.”

Ben addressed the audience, “When you look at how Krista’s operating here, she is clearly using the software to tell her things she needs to know about her evidence. Generally when somebody is talking about how they have two locks on the narcotics door and nobody can go in alone… and you’re doing inventories, and you’re doing dispositions, and things are running smoothly, usually these are not things we see in a poorly run organization. These are things that are exemplary.”

In closing, some of the biggest improvements for the Des Moines Police Department – in regards to evidence management – have been: 1) how quickly they can now process evidence 2) they can now log items individually, as opposed to “batching” them 3) they can streamline and track the evidence movement more easily, 4) in a couple of clicks, they can get more information about the items they have in inventory  5) they are able to easily dispose of items using the auto-disposition feature within Tracker’s SAFE software system, and 6) because Tracker is a web-based system, Krista and her team can help officers remotely which is a more effective way of working together.

Tracker Products and The Evidence Management Institute want to give you something better to think about during this time of uncertainty.  This is the first of seven in a series of free evidence management training and panel discussions. Want to join the discussion? Register for the series,  watch and comment on the recordings here, or join the Evidence Management Community Forum.

Or, if you’re interested in Evidence Management Training Classes from our partner company, VISIT EMI HERE.