Chain of Custody and a Rogue Police Officer

The term “chain of custody” refers to the system of evidence handling and tracking during the investigation of a case. Proving that an item has been properly handled through an unbroken chain of custody is required for it to be legally considered as evidence in court. But sometimes, overworked and underpaid officers go rogue. Why? Because of the time-consuming and cumbersome pile of paperwork that’s involved in the old way of tracking evidence. 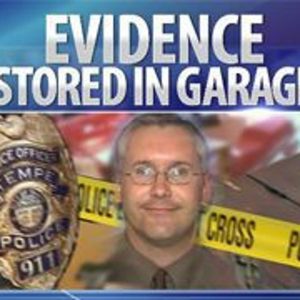 Take the case of an Arizona police officer, Tony Trow, who knowingly botched 10 cases – including murder and rape – by keeping evidence in his garage and failing to write reports. Included in the evidence was a report for a murder case, of 19-year-old murder victim Daron Gibson, that Trow put off for five years; as reported by CBS affiliate KPHO.

The internal investigation revealed that, for 8 years, Trow stored evidence from five cases in his garage to hide his unfinished work. The evidence reportedly included case notes, crime scene photos and even original recordings of interviews. The report from the investigation said those items had been tossed together in cardboard boxes. The report also showed Trow didn’t bother to turn in the rape kit of a 17-year-old.

The family of murder victim, Daron Gibson, says throughout the years – before the internal investigation took place – they stayed in contact through email with officer Trow. In one of those emails obtained by KPHO, Trow stated, “Neither I nor the Tempe Police Department have given up on this investigation in any way. In fact, I have spent a lot of time on this case often at the expense of time in working other cases.”

In response, the murder victim’s mother, Chyendall Gibson, said, “He wrote that to me while evidence sat in his garage!” The Gibsons told KPHO that the Tempe Police Department never discussed the fact that their son’s case had been botched.

While we, at Tracker Products, certainly don’t condone this type of misconduct, we understand that without a digital tracking system – that’s effective and easy to use – there’s simply no way to know if evidence has been mishandled. While the fault, in this case, lands squarely on the shoulders of the officer, we would also like to argue that the problem is much bigger than just one man, or even one police department, it’s antiquated tracking systems; and the lack of a strong chain of custody, that fails victims.

If Police Departments have a well-trained evidence custodian, and a digital tracking system that institutes a solid chain of custody, it would be next to impossible to get away with this type of gross misconduct.

Accountability of evidence is critical for the effective prosecution of criminal cases, but evidence management doesn’t end with a list of the evidence. It’s important that your system provides easy access to those who need it, while denying access to those who don’t. With Tracker Products, all stakeholders can access and view the files they need – 24/7/365, from anywhere in the world – including the other evidence associated with the case.

Think about it… if evidence is being tracked and is visible to evidence custodians, officers, investigators, lab technicians and opposing attorneys, it’s not going to end up in someone’s garage. A digital tracking system ensures that the chain of custody is transparent; holding all stakeholders accountable for their involvement.

You may find yourself saying, that type of misconduct would never happen in our department. You’re probably right, that’s why the story made the news. That type of thing rarely happens. But, do you know what does happen on a regular basis? Evidence is lost. Yes, it’s probably still in the storage facility… somewhere. Nearly every day, we hear stories about evidence that’s suddenly gone missing.

See Related Article: IF YOUR EVIDENCE WAREHOUSE COULD TALK

In short, you can protect the integrity of your chain of custody by implementing evidence management software. Digital records of evidence allow you to quickly search and find what you need, but it’s much more than just barcodes and inventory control. Tracker Products’ evidence tracking software, called SAFE, is end-to-end chain of custody software for physical and digital evidence, resolving each of the critical issues facing evidence management.