Evidence Management: The Key to Catching the “Bedroom Basher”

The amount of evidence that’s collected at a single crime scene is mind-boggling; but consider the number of crimes that occur, every day, in cities across the United States. In 2018, the FBI estimated that there were 1,206,836 violent crimes and 7,196,045 property crimes, nationally. Multiply that by the number of items collected from each of them, and even the layman will understand the tsunami of evidence that each and every law enforcement agency must deal with on a daily basis.

Most people think that evidence management ends with intake and storage; but, evidence has a lifecycle. The various stages demand a tracking system that produces an unbreakable chain of custody, provides documentation of evidence movement and transfer, facilitates communication between investigators, lawyers, and property room personnel, automates the disposal-approval process and includes accountability functions, like audits and inventories.

In the article Keepers of Property and Evidence is Critical to Tustin PD Investigations, they discuss best practices in evidence management and how maintaining the integrity of the evidence protects the public and serves the justice system.

For 16 years, a man served time in prison for a crime he didn’t commit. The facts against Kevin Green in 1979 were strong. His wife told police she remembered seeing her husband enter her bedroom before being brutally attacked. DNA evidence at the time was limited to confirming blood type, and it matched Green’s.

The evidence that was key in exonerating Green? A pristinely stored rape kit from 1979.

RELATED: THE IMPORTANCE OF HAVING AN ORGANIZED PROPERTY AND EVIDENCE ROOM

The expert and tenacious work by former Tustin PD Detective Tom Tarpley, that led to Parker’s confession and conviction, is undeniable. But there’s a less visible group of police employees who played an equally important role in freeing Green: Tustin PD’s Property and Evidence team. 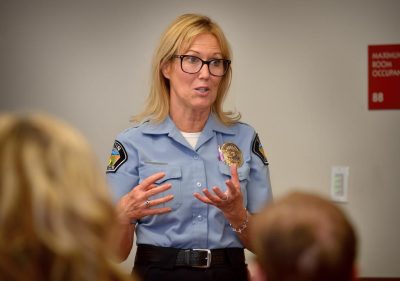 “Everyone is really proud of that case,” said Andrea Albin, Property and Evidence Specialist. “The team so carefully kept the evidence that we were able to determine who the DNA samples belonged to all those years later.”

It’s a job, Supervisor Dave Kanoti said, that often goes unnoticed because he and his colleagues work behind secured doors where only a handful of employees have access. “We do a lot, but you wouldn’t know it on the surface,” Kanoti said. “Nobody sees what we do because we work from a window.”

STORING THE STRANGE AND VITAL

Rows of boxes, envelopes and plastic containers are meticulously organized and stacked on shelves. A massive walk-in freezer houses bulky DNA evidence, and an industrial refrigerator is where the team keeps more delicate specimens, such as blood samples. Weapons — from nunchucks to guns to samurai swords — are stored in a fenced-off area on the lower level.

About once a year, many of those weapons get cleared out and destroyed at a local scrapyard.

Also behind lock and key: the area where drugs and money are kept. “Take a whiff,” Kanoti said, addressing the faint but distinct smell emanating from the shelves. “It used to be a lot worse when officers were finding and bringing in actual marijuana plants.”

Cash gets deposited — Kanoti said they only keep evidentiary money on-site — and drugs eventually get destroyed at an outside facility.

All kinds of strange things can be found in the property and evidence room, such as a rooster statue from a domestic violence case and an urn filled with ashes found in a carport of an apartment complex.

The rules of property and evidence are rigid and explicit, which is how Tustin PD maintains its reputation as a solid operation.

“If we botched one case or put doubt in the way we’ve handled something, it can get used against us in the future,” Kanoti said. “It’s very important.” 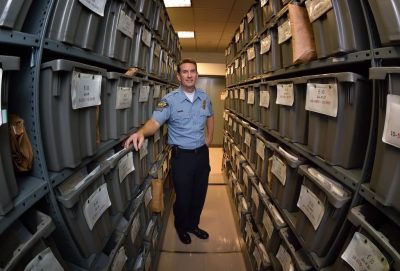 More than 55,000 items are stored in Tustin’s property and evidence room, and last year the team booked in more than 17,000 articles. Much of what fills the facility is evidence, but there are also found items and articles taken in for safekeeping, which are often returned to the rightful owner.

Just as important as booking items in is making room for new ones.

“We spend a lot of time researching cases to see if they’re closed and if we’re able to get rid of things,” Albin said. “We don’t make that decision ourselves.”

There are a variety of reasons articles may be pulled from the shelves, including when certain cases are adjudicated or the statute of limitations expires. The team last year purged more than 14,500 items.

With so much coming in and going out, Kanoti said the team routinely participates in independent audits to ensure they are keeping up with their self-imposed high standards.

“We invite people from other agencies, have them randomly choose 200 items and say, ‘Let’s go find it’,” Kanoti said. “It’s the only way we can be transparent in a closed environment.”

Kanoti and Albin, both self-proclaimed lovers of all things orderly, said the greatest part about their job is knowing their work can help convict a criminal or, in some cases, exonerate the innocent. “It is not something we take lightly,” Kanoti said. “If we are not doing our job, we let the community down. Our job is to take care of our employees and the public by taking care of the evidence.”

Anything at a crime scene may be evidence: Weapons, Bedding, Clothes, Personal Items. No matter the size or perceived importance, if items are used in – or connected to – a crime, they may become evidence that is presented during a trial.

Of course, there’s no way to know which pieces of evidence will be presented in a court of law. While most items probably won’t be, it’s imperative that evidence custodians treat each item as if it were the key to proving guilt or innocence. With that in mind, protecting the integrity of the evidence in your storage facility – and knowing it’s exact location at any given moment – is crucial to the legal process.

An effective software tracking system – and compliance with established property and evidence procedures – is vital to ensuring the integrity of every piece of evidence at any given time. If you’re curious about whether your current system is helping you manage your evidence, ask yourself five questions:

Tracker Products’ software users are saving valuable resources by finding the information they need quickly and consistently through the customized Dashboard. And because we’re browser-based, the Tracker Products system updates are seamlessly delivered on a monthly basis. You can generate data in real-time, share what you need to when you need to, and save your organization both time and money.

“By implementing Tracker, we have been able to get rid of so much evidence that we stopped plans for a new storage facility for the property and evidence department.” — Dave Simpson, Director of Technology, Frederick County Sheriff’s Office

If you want to do your part, to protect and serve, with a state-of-the-art evidence tracking system, contact Tracker Products today to learn more!

Or, if you’re interested in Evidence Management Training Classes from our sister company, VISIT EMI HERE.