Evidence Management: The Guy Who Got It Right!

A law enforcement culture that respects property/evidence management personnel, and understands the resources they need in order to be effective, has become increasingly important in a society that seems to enjoy disgracing agencies when they’ve mishandled evidence. But, as important as respect and support are, evidence custodians still seem to be as neglected as children in the foster-care system.

Headlines abound regarding criminals whose cases got thrown out of court because of mishandled or misplaced evidence. Contaminated DNA, a missing weapon, a gap in the chain of custody… they all prejudice the justice system.

RELATED: THE UNTRAINED EVIDENCE CLERK AND A FAULTY TRACKING SYSTEM

But what about the success stories that never make their way into the news, because they’re not “sensational” enough? Little is known about the evidence custodians who get it right. Take, for example, the following story of a police officer who vowed to make a change for the better; impressing even those who wanted him to fail. 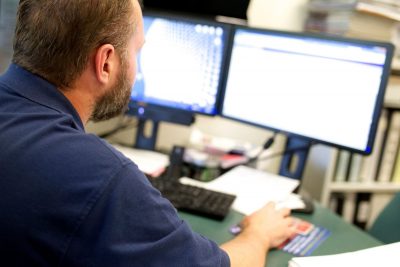 When Shawn Henderson was re-assigned to the Evidence Management Unit of the Carrollton police department – after being an officer and supervisor – he didn’t know how massive the evidence facility problems were; much less how to solve them. But, he did understand that if his team was going to have any success – in re-organizing nearly 70,000 pieces of evidence – the chief-executive and the leadership team were going to have to understand the problems and buy into the solutions he proposed.

So, he did something to facilitate it.

Shawn discovered that the Evidence Unit was missing some guns. Because previous custodians had never performed an inventory – in the 50 years the law enforcement agency had been in existence – he had no idea if the guns had been released, destroyed, mistakenly transferred, or were at a crime/ballistics lab.

He needed the agency to understand the gravity of the situation, so he invited internal affairs to investigate their unit, to figure out where the guns were. He then sent a memo to the chief and explained the situation, because he knew it would bring some attention to the department. What he didn’t understand was how it was going to impact the people that worked for him in the Evidence Management Unit.

For him, it just seemed like, Hey, this is the way we can get the chief to pay attention. But there were some hurt feelings, some consternation, and some fear, based on his actions. However, it put the Evidence Management Unit in a position of power; wherein the leadership team had to pay attention because it was a significant problem.

In the past, they were unaware of any issues. So the investigation was really the best way to turn the spotlight on themselves and force some self-examination of their unit – and the agency. To their credit, the leadership team was supportive.

Shawn also told the chief that they had a plan for improving operations, which started the conversation about the importance of the Evidence Management Unit and the necessity for Evidence Management Training. After that point, they had all the support that was needed to make decisions, tweak processes, and get things moving in the right direction.

As part of the process, Shawn developed something akin to a business plan. It had extensive six-figure costs; including some capital expenditures and recurring costs for the agency. And, when an agency is dealing with a finite budget, that was a lot to ask.

But, Shawn and his team explained the possible consequences of inaction, as well as the benefits to the agency and stakeholders, and the advantages of preserving the integrity of the evidence. Because the Evidence Management Unit had done the groundwork and diagnosed some of the problems – plus, they had a plan in place for how they were going to resolve the issues – the leadership team bought in relatively quickly.

The first step was choosing state-of-the-art evidence tracking software. In the end, they chose Tracker Products’ software ‘SAFE’, because it was more than just a basic barcode solution. In addition to inventory control, Tracker provided a software system that was capable of: producing an unbreakable chain of custody, providing documentation of evidence movement and transfer, conducting the flow of digital evidence, facilitating communication between investigators and property room personnel, automating the disposal approval process, and enabling accountability functions like audits and inventories. 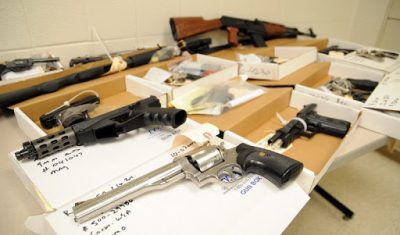 The end of the story? Shawn and his team found the guns. They were located during the IA investigation, buried under years of neglect. But, by having them missing in the first place, he accomplished a much bigger objective – bringing attention to the needs of the Evidence Management Unit; after 50 years of neglect, so he considered it 100% successful.

Tracker is a completely browser-based evidence software solution that allows you to enter, view and edit records, print reports, barcodes, and more via the web browser of your choice. No software to install on computers or servers, no updates that require IT support. Our Software Development team manages system-wide updates on a scheduled basis guaranteeing you have the latest enhancements at your fingertips.

Not only that, there is automated workflow with SMS notification; which means you can set up texts to notify you when cases or items are entered and/or edited and track system transactions with a digital signature. This eliminates the need for emails. Tasks can be directly attached to cases and/or Items.

Our SAFE evidence tracking software is more than just barcodes and inventory control, it’s an end-to-end chain of custody software for physical and digital evidence, resolving each of the critical issues facing evidence management today. To learn more about Tracker Products – or to get information about a free trial – CLICK HERE.