In this interview, Tracker Products sat down with Jacquelyn Riley, the property, evidence and records officer with the University of Kentucky Police Department. The intention of this interview was to talk about the challenges, solutions, and best practices she has experienced in the evidence management process, since joining the U of K PD. 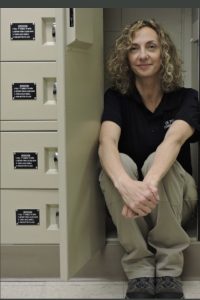 We asked her about the number of officers that are in her department, a little about her work history, and the types of duties her job entails.

Jackie said, “There are about 50 – 55 officers in our department. I have been in this position since 2018, but I’ve been with the UK since 2009. I actually started with the police in 2004 in a dispatch communications role.

While at the University of Kentucky, I interacted quite a bit with our records department officer and was kind of fascinated with records. For a short time, I helped her out while she was on leave. I thoroughly enjoyed it. At the time it was not a position that was open to civilians; it was for sworn officers only. When she left to go into nursing full time, they opened up the position to civilians as well. I was just ecstatic about getting the job in 2018.

And, like I said, it is evidence also, so it’s primarily: chain of custody, keeping records, statistical reports, report requests… We do a lot of logging body cams, dash cams, and camera video surveillance systems. So, I will process any and all evidence – and do transfers for that as well – and, at the same time, the other end for reports and records.”

RELATED: WHY IS CHAIN OF CUSTODY TRACKING IMPORTANT?

The Tracker rep asked, “How long have you been using Tracker’s SAFE software?”

Jackie said, “We started using SAFE this year. We were with Fluid before – which of course is the older version [from Tracker].”

Tracker asked, “What’s the biggest difference that you noticed when you transitioned between Fluid and SAFE?”

Jackie said, “Oh, my goodness. The biggest, by far, is the increase in accountable communications. Once an officer puts evidence in – especially the old system – [it was] out of sight, out of mind. And, I noticed the previous records officer would communicate through emails. She would print her emails to have documentation that [proved] she did reach out and attempt to get an officer to update an old case. And, again, it was just out of sight out of mind. But with this new system, it automatically generates a task to all of the officers… within the system. That is leaps and bounds ahead of what we were doing.

I think my best example would be… during a lot of the cutbacks – that all of America has been facing with COVID – we had a lot of officers catching up on desk work. They weren’t doing the regular one-on-one type of communications in public. So, they had a lot of desk time and I took that opportunity to have them review the entirety of their own cases.

And it was all very well documented within the task system… I sent them the email, and then they were told to respond through tasks. So, as they opened up each old case, SAFE would send me a notification as to whether they were going to retain the evidence – for court or for future references – or if it was free to go ahead and destroy. I had direct contact from the officers who were actually in charge of all of this evidence, and the system logged it in… as far as, what the response was: to retain it, destroy it, or contact the owners. SAFE just had it all listed out day-to-day by officer. It was the quickest way, I’ve ever seen, to go through old evidence and reduce our inventory.”

Tracker asked, “Is it fair to say that you have more room in your facility now because of the more efficient disposition process?”

Tracker said, “Transitioning to a new system – even an upgrade transition, like from Fluid to SAFE – typically there’s a learning curve to that. Did you get any pushback from your officers with the new process?”

Jackie said, I didn’t get any complaints about it actually.”

Tracker asked, “What would be the main reason you would recommend our software to someone that might not know anything about what Tracker Products and SAFE is all about?”

Jackie said, “The ease of taking control of an entire evidence room – including different evidence locations – it’s all right there. It does create a tremendous amount of accountability. But, if anyone is like I am – not extremely tech savvy – you have an online chat [feature]. The Wiki learning is there – and I’ll go to that first, to do my best to research – but your support system is the best I’ve seen so far. Not just in the evidence, but in a lot of areas. You have the little chat box that pops up; it’s there and it’s ever present.

And so, while I’m working, I have multiple avenues to go to for help. I can search online, I can email, I can call, and I can just simply type a little chat. And the response time is incredible!

So, in learning a new system, it has everything for accountability. I mean, it safeguards the records officer, and the evidence officer, because it shows an excellent chain of custody.

And they can customize SAFE. The last time I got a hold of someone, it was about setting up a trouble locker. It was basically in the system already, but the way we had it set up made it difficult to find. Our Tracker rep saw it immediately, and she said, That’s an easy fix. And my thought was, Ha… you don’t know me. I’m not going to be able to fix anything easy. But she said, Hold on a minute. And, in a minutes time, she said, Hit the refresh button, and it was done!

I’ve had more help with this system than I’ve had with CAD systems and other records systems. They all have help, but this is the quickest and easiest and the most customizable program that I’ve worked with in my 15 years of being in police.”

Tracker asked, “Is there anything you can think of that we could do better, or something in the software itself that you’d like to see added?”

Jackie said, “The only area I can really think of is… when we first got the system – there’s me, and one other evidence officer – we were going to the training; it would have really helped to have had some mock information, [to be able to] put in mock officer names, mock victims, or suspect names and mock evidence to practice moving stuff around and doing reports…”

Tracker said, “We do that now with the upgrade. Now, we export all your old data and get with you to clean it up. Then we import that into your trial site – where all your training is – and then you train with your own data. After you train your officers, we just wipe that site clean. We re-import all of your data and you’re ready to go. So, if you’re ever talking to anybody else in another department, let them know it’s a much easier transition process now.”