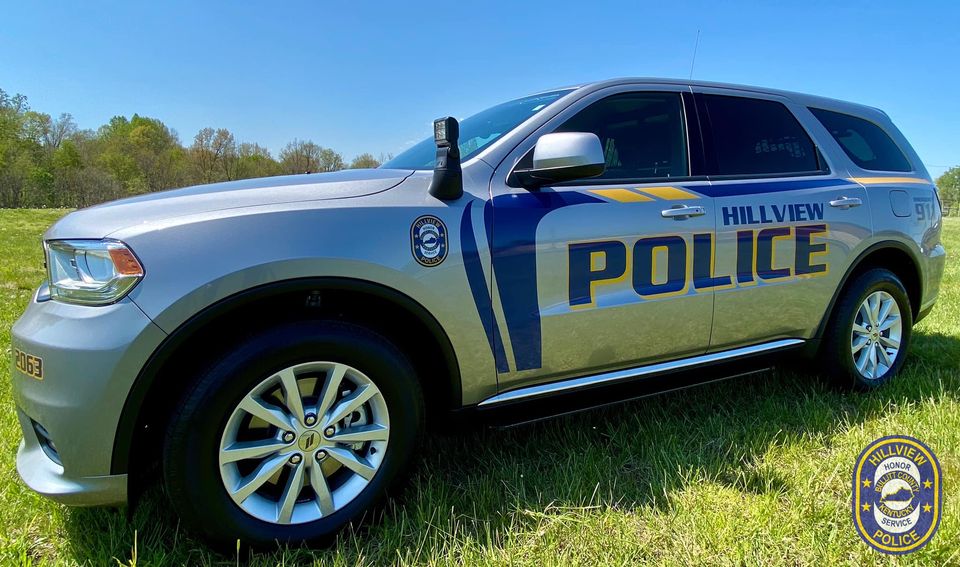 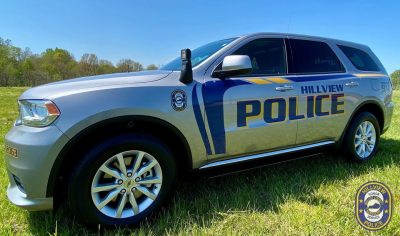 Chris Boone, a Detective with the Hillview PD, was kind enough to participate in an interview with Tracker Products recently. The intention of this interview was to learn about some of the challenges Chris has faced in the evidence management unit and the best practices he put in place to tackle them. We hope this interview – and others like it – will be helpful to evidence custodians nationwide; bringing together a community of like-minded individuals who are invested in the process of continual improvement for the police departments they serve.

We asked Chris to tell us a little bit about his responsibilities. He said, “I’m a Detective with the Hillview Police Department. Also, due to the size of the department – we have 18 officers,  counting the Chief, the Lieutenant, and a part time officer – I’m the evidence custodian and the crime scene technician, if need be.

I’ve been with Hillview now for five years. I worked patrol for two years here, and then the detective position came open. I applied to test for it and was lucky enough to get promoted to detective. Day one, as a detective, I also inherited the evidence room.”

Tracker asked, “Are you the only person in the evidence room?”

Tracker said, “What was it like when you took over evidence – assuming that you didn’t have any history with that? Tell us a little bit about the challenges that you had, or talk about what was eye opening for you.”

Chris said, “To be honest with you, my transition into the evidence room wasn’t too bad because we were already using Tracker. I think 2015 is when we transitioned to Tracker. That being said though, our Lieutenant – which is Lieutenant Charles McWhirter – he had it before I did. He’d done a good job getting us moved over into Tracker, [but] we still had evidence from probably 1996 all the way up to 2004 that was still in our old system. He hadn’t made it that far into the process.

Day one – when I took over the evidence room – my biggest push was to get everything moved from our old system into Tracker. So, we could manage the system a little bit better and see where it [the evidence] is, and where it’s going, and when we can get rid of it.”

Tracker asked, “And did you accomplish that goal?”

Tracker said, “You must have been introduced to the Tracker’s previous version of the software called Fluid. Have you upgraded to the SAFE technology? If so, what’s that been like for you?”

Chris said, “We have. We just kicked off with our first SAFE meeting today, so we haven’t actually used SAFE yet, but it’s coming.”

Tracker asked, “And, what’s your takeaway from today’s meeting? Did anything stand out for you?”

Chris said, “One thing I do like about the SAFE program is the pie chart on the main screen. It’s a visual cue, every time that I log on, I make sure that we’re disposing the evidence as it [new evidence] comes in. That’s one of the biggest problems that we had when we first moved to Tracker. We had evidence from the early nineties, and the books said it was destroyed – it was supposed to be destroyed – but was actually in the room. So, the biggest thing I see going with SAFE is that it’s gonna have that constant visual reminder of evidence needing to be disposed of.”

RELATED: USING YOUR EVIDENCE ROOM DATA AS AN ANALYTICAL TOOL

Tracker said, “How did you deal with the challenge of finding all of these things that were supposed to be gone? That must’ve been frustrating.”

Chris said, “Yeah, it was very frustrating. The way it worked before is… we had a log book and you, as an officer, would enter in the log book… I took marijuana from this person on this date. And this was my case number. Then all that information would get transferred to a card that was put in a box. So, if you had five different officers entering evidence, you have five different officers entering evidence in five different ways. It was never consistent. So, it was very hard to keep track of who had what going on.

And then there was stuff that wasn’t in the evidence room and you go ask them about it, and he’s like, Oh, well, I remember destroying this. I remember destroying that on such and such a date with no court order in place. So, it was very frustrating. There were lots and lots of memos written about where stuff was and why things were done in certain ways… Not to belittle – or get anybody in trouble – but myself and Scott and Chuck, we didn’t want the State Police to come in and say, Hey, where’s this piece of evidence?

When you’re the custodian – even though they haven’t been here for 10 years – when you’re the custodian that’s kind of your problem. That’s another great thing about the Tracker Products in the Fluid or Safe system… Once we get that court order we can upload that court order as media into the case and dispose of it. And if somebody comes in and says, Hey, where is this, and why’d you get rid of it?  I can pull the court order up on that case and say, Justice, said that I can dispose of this, or return it to the owner, or whatever it is that we did with the property.”

Tracker asked, “What did your warehouse look like once you started getting a handle on where things really were and what could be disposed of? I mean, did you get to the point where you had more space?”

Chris said, “Yeah. When the evidence room first changed hands – from the previous person who’d been running it, to Lieutenant McWhirter – you were literally pushing evidence out of the way when you opened the door. It looked like a hoarder lived inside the evidence room. He would go in there and he would just step on evidence that was laying on the floor and just dig through stuff. I mean, it was in disrepair, dirty, no accountability for where things were at.

Now if you come in – or the State Police come in – everything is on shelves and it’s in clear plastic bins. You could say, I want to see this case number. I can pull it up in Tracker, go straight to the bin, and show you everything that’s related to that case. I can also print off the chain of custody and see how long it has been in that bin, who has moved it, why it was moved, and all that type stuff.”

Tracker said, “Tell us a little bit about your duties as an evidence manager. What is the intake process like? Do the officers do that portion? Do they label it? And what happens after that?”

We all understand that [the procedures] can change at any time. It’s nothing for me to get a phone call in the middle of the night… it could be something as small as, Hey, I took this piece of evidence, or this evidence that is too big to fit in a temporary locker. So, I’ll have to come in and we’ll do different things.

But, as far as our process goes, each officer is responsible for processing the evidence that they’ve collected. Once they’ve taken it into the processing room – which is all recorded on video – they have to sanitize the workspace before they start working, that way we have no cross contamination of any kind. They lay all their stuff out, take pictures of it, and then, according to whatever is, you bag the evidence.

One of the things that we’ve put in place – because of all the fentanyl risk out there – we no longer field test anything. It’s not worth any of our people getting sick. So, they’re bringing it in, and whatever the package is, we do our best to weigh it. Then it goes into a Ziploc bag and the Ziploc bag goes inside of an evidence bag and the labels get put on the evidence bag.

Then it goes to the lab. And once it comes back from the lab, I process it into the evidence room. We went out and bought a seal-a-meal thing, and we started vacuum sealing all of our narcotic evidence; just so there’s no risk of airborne exposure to anybody that goes into the evidence room. And that’s also made our police department smell a lot better.”

Tracker said, “In addition to some of the things you’ve shared, was there any glaring problem when you took over where you went, This has got to change.”

There was just no consistency to it and it was all handwritten. And, we all know how people write stuff. Half the time you couldn’t make out what they were writing or who entered it. They would just leave stuff blank on the cards.

A good thing about Tracker is that we can set it up to where they may leave something blank and try to go to the next frame, but they’ll get an error saying, Hey, you can’t leave this blank. We have to collect this information in order to process evidence. So, going to the Tracker product really streamlines the system. It sets requirements for people, for information, that they have to put into the system for us to be able to pull stuff back from the system.”

Tracker asked, “Did you get any pushback from any of the officers about this process?

Chris said, “Just one officer that was in charge of the evidence room. It was more of a pride thing. He didn’t want to change; he thought things were fine the way they were. But, after he saw the process, he was more open to it. We have problems every now and again with people who aren’t necessarily computer savvy. They generally have questions about why something isn’t working. Then, it’s always very simple… You didn’t put the right number in here, or you didn’t do this, or you didn’t do that. And once we show them what it is, they move past it.”

Tracker asked, “So, how did you get trained on Tracker?”

Chris said, “The guy that trained me… he literally said, Here’s your login, here’s your password. And if you ever have a question or lost about what you should do next, click save and go view the page and you’ll see what’s missing.”

Tracker asked, “Did you reach out to Tracker for any more clarification on the system?”

Chris said, “No. I was able to figure everything out. I’m by no means a computer engineer, but I was able to figure the process out; it’s fairly straightforward. Being in charge of the evidence room, I sat down with the program, looked it over, and learned it on my own. That way, when other people had questions about what needed to be done, I could answer.”

In closing, Tracker asked, “Do you have any questions or any comments about anything today?”

Chris said, “Just that Tracker Products has made my life a lot easier; to the point to where we are a KLC accredited department. A lot of that has to do with your evidence room. You know, being able to be accountable for everything, and the way it’s handled. We’ve actually had numerous tours from other departments [who] come to our department per KLC. His direction is… You all need to go look at what they’re doing, because what they’re doing is working, and that’s the way it needs to be done. And that’s [due in] part of using Tracker. It makes things so much easier in the evidence room.”