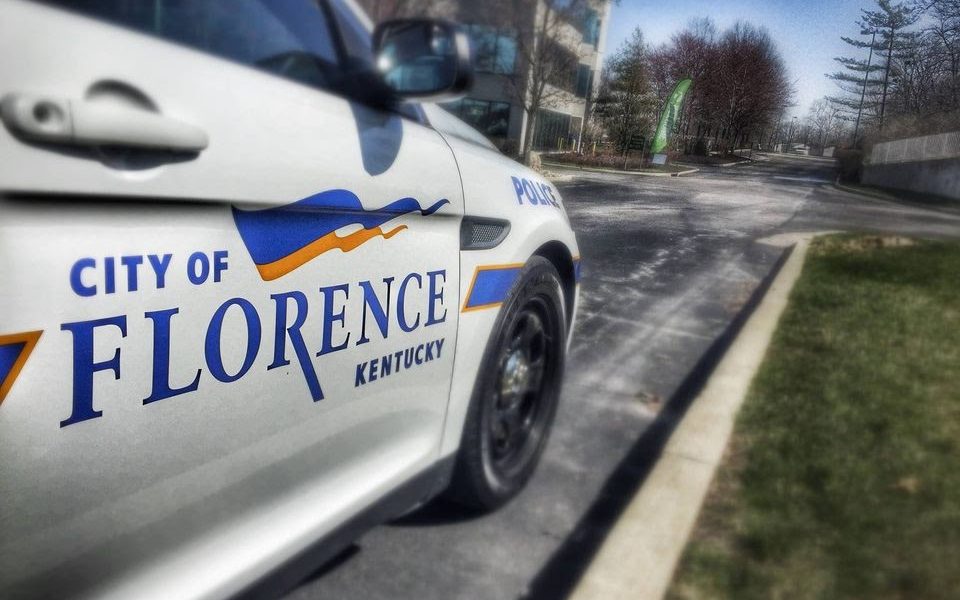 We interviewed Erik Daniels, a Detective Sergeant with the Florence Police Department, to understand the highs and lows of his evidence management journey. We, at Tracker Products, feel that now – during this time of isolation and uncertainty – is the perfect time to come together and learn from other evidence and property custodians. By sharing the challenges and solutions that evidence managers face on a daily basis, we hope to create a community of like-minded people that will be a source for: education, inspiration, and mutual support.

Tracker began the interview by saying, “Tell us a little bit about your current duties as a Detective Sergeant.”

Erik said, “I’m in charge of the criminal investigation section, our property and evidence room, and I’m the team leader for the SWAT team. Basically all property and evidence comes under my purview. We have an evidence technician that does the day-to-day operation of moving evidence, which keeps a lot of the weight off of me, but as far as audits and seizure money and all that stuff, I handle that.”

Tracker asked, “Can you tell us a little bit about the size of your department, and how long you have been in your current position?”

Erik said, “There are 66 officers with our department. I’ve been with Florence for about 14 years. The management of the evidence came with the role of Detective Sergeant. The property room – as far as its internal management and function and how things run – has been [my responsibility for] the last 2 – 3 years. Prior to that, I was just like any other officer that submitted evidence for cases that I had.”

Tracker asked, “What is a typical ‘day-in-the-life’ of your evidence management duties like; from intake to disposition?” 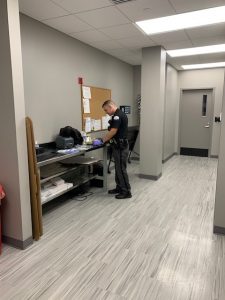 And there, the case officer who is responsible for packaging – different evidence requires different packing – they go into Tracker’s SAFE software system, create the case, give the items numbers, and label and package all the evidence. Then they place it in that pass-thru. On the other side, we have the property room, that we store everything in, that is access controlled. 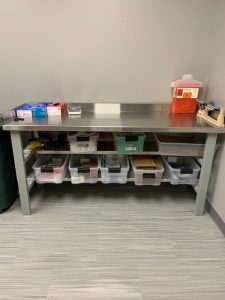 There’s only a few people that have access to that: the property custodian, myself, and another investigation supervisor. It’s got lock-keys and an electronic key card. Generally, the property custodian comes in every day and sees what cases have been created, gets them out of the pass-thru lockers, and then routes them where they’re supposed to go. 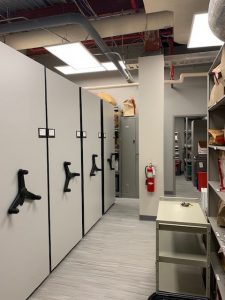 Different evidence requires different types of secure locations. For instance, narcotics or money has to be double locked. Found property can be placed on a shelf in the property room. If it’s narcotic evidence, that needs to be sent to a lab – or if its fingerprints or if it is firearms or any type of evidence that needs lab work – she basically routes that to another storage locker, inside the property room, that myself or another detective will take to a KSP lab and have it submitted for whatever type of lab work that needs to be done.

The evidence could be [at the lab] for a couple of weeks, to several months, to years… depending on what the evidence is. If it’s DNA, or something like that, it takes a lot longer. Once it’s completed at the lab, I go and pick it up. It comes back and then it’s checked back into the property room. And that’s where it stays until the disposition from court.

Different types of evidence require different types of destruction orders. So, once the case processes, evidence can be checked out – if there’s going to be a trial where we actually have to introduce physical evidence into court. The majority of cases are disposed of without the evidence having to be checked out. We’ve allowed defense attorneys to view the evidence, if they want to, but it usually stays in the property room.

After the court decides what can be released or destroyed… if it’s drugs, obviously it will be destroyed. If it’s money there are seizure forms and that goes into the safe that will become part of the city or whatever agency assisted in that case. Other property can be released. If it’s a cell phone, or something that we don’t need, then we get disposal forms from the court and those usually either come in the mail, or they get forwarded from the circuit court, and then our evidence custodian takes those and then routes it where it needs to go.

If it’s drugs, it goes to a destroy bin. If it’s seized money, it goes into a special folder to make deposits, occasionally. If it’s other property, that can just be thrown away, she puts that into a different bin. And then, I do the actual destruction. The seized assets, I have to take to our finance director who deposits it. If it’s a gun or a firearm, it has to go down to KSP.

Ultimately, I’m responsible for making sure that the property makes it to wherever it’s supposed to be, whether it’s destroyed or released. The destroyed stuff, like drugs, we have an incinerator for, and every several weeks I will have to take them over to burn. Guns, like I said, I have to transport them down to the KSP; and that’s usually where it ends for the most part.

The good thing about SAFE is it makes it a lot easier to track where something is and I can access it on my phone. We get questions about so many cases and so much property. I can punch in a case number, or a person’s name –  the property custodian, she attaches things like:  media, destruction forms, orders from the court – and if we get a question from whoever, we can look it up quickly in SAFE and we have all the documents right there.

And it’s tracked. It says who submitted it, who took it, where did it go, how long it was there… and even the lab forms. All that stuff gets attached to the case. And it makes it a lot easier for us when it comes to accessing it. Everything’s electronic. I mean, we get the physical forms, and stuff that comes back, but those are scanned and attached to SAFE, so that it’s searchable. It’s easy and I can access it pretty much from anywhere.”

Tracker asked, “How long have you guys been using SAFE?”

Erik said, “Four years. The previous Detective Sergeant was the one that transitioned everything over from the way we were running it over to SAFE. So, by the time I came over, the property room had been established. Using SAFE made it a lot easier for me to come in and take over. And the SAFE system was relatively painless to figure out how to use.

I didn’t have much experience with the property room prior to this. I can only imagine what it was like before we had the system to track everything… it was all physical property cards. I’m happy that at least the SAFE system was established by the time I came in to take over.”

Tracker said, “Even though you weren’t necessarily around with the previous system, did you receive any feedback, as far as the biggest difference or advantages from transitioning?”

And, when it comes to discrepancy reports, I can scan a whole section of our property and then run a report. It will tell me if there’s a discrepancy, like, if there was a human error and evidence was accidentally put in a wrong bin. Or, we’re showing that this piece of evidence is out at the lab, but it’s obviously physically back now. So, you can go back and catch simple mistakes like that.

I can only imagine having to flip through a ton of cards trying to find the one piece of evidence,  when the system will find it in a second.

On a day to day level, my main thing is to look at my home screen. I can see how much money we have, how much drug evidence we have…. It’s all right there for me. If somebody calls asking about property, or if a detective says, Hey, there’s supposed to be this video surveillance DVD that’s in property. Can I get that? I go and find it by the case number and we’ll go down and grab it and get it to the detective.”

Tracker asked, “Can you talk a little about your experience with Tracker’s support staff; either positive or negative?”

Erik said, “I don’t know of a negative instance. There are times that there’ll be a bug or there’ll be an issue. If the system goes down, whether it be on our end or the other end, Jackie is our point of contact. And if it is a problem with the software, usually it’s resolved relatively quickly. I don’t know of any extended time that our system was down for any reason.”

Tracker asked, “What would you tell somebody – that might be shopping evidence management software – about Tracker’s SAFE software?”

Erik said, “The SAFE software is easy [to use]. The learning curve – teaching officers how to use the system is relatively easy. In law enforcement, you have guys that are newer – that are very tech savvy – all the way down to older guys where learning technology-based stuff can be difficult. [Either way] It’s not something that’s going to require a massive amount of time and training to figure out how to use. It’s quick and it’s efficient.

And, it’s a system that can change if there’s something else that we need it to do. I can recommend SAFE based off of my own personal experience… as far as ease of access, administering it, and being in charge of it.”